Early Christianity was incredibly diverse and the Gnostics were just one of many Christian groups that venerated Feminine aspects of the Divine. In the the 3rd and 4th centuries—when these alternative Christianites with their divine figures of God’s Wisdom, God’s Consort, the Lady of the Temple, and a Feminine Holy Spirit—fell out of favor for a very much “God-is-a-Dude” approach…a very interesting thing happened: Devotion to Mary. the Mother of Jesus, and devotion to the female Saints, suddenly rose in prominence.

Much later in Europe when it was codified that women were second-class people the image of suffering crucified Jesus with bountiful milk-giving breasts appeared. Then, long after that when the Protestant reformation kicked out Marian devotion, Protestant mystics started having visions of the Divine Sophia of God.

And on it goes with many more examples that one could slot before, between, and after. You can’t keep a good woman down. The more we try to push her away the more she breaks into this world. So, lets go to the 1800s to another epoch-shaking experience of the Divine Feminine which would change everything forever. 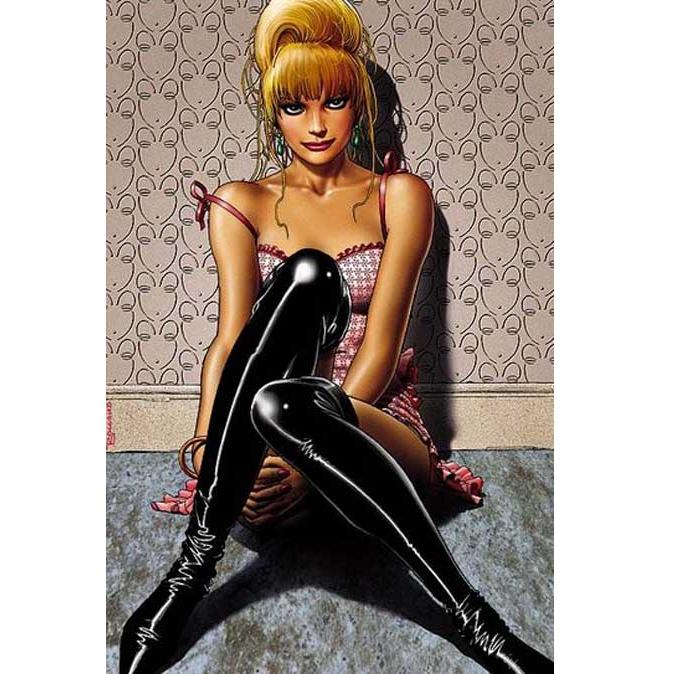 Lord Fanny from The Invisibles Via http://goo.gl/teusol

The Gnostic Church returned to the world in a dramatic fashion in France at the end of the 19th Century when an archivist named Jules Doinel had a vision of Sophia, the prime Divine Feminine figure in many Gnostic systems, empowering him to restore the Gnosticism in an organised and public way.

It seems that that Doinel and his fellow Restorationists believed that the revival of the Gnostic Church was the beginning of a New Age, one of knowledge (Gnosis) and wisdom (which in Greek is the word Sophia) and that this new time in human history was somehow one where women and the feminine would ascend.

This wasn’t mere lip service or religious symbolism, as Doinel’s church gave full ordination and leadership roles to women, a shocking and near unprecedented act in Western religion at the time.  And though the struggle continues, it is interesting to note that the Gnostic’s New Age has coincided with a rise of rights for women that continues to this day (with ways to go yet…).

To be a Gnostic is to partake of this elevation of the Divine Feminines and join in the work of this New Age, be this new aeon something decreed by God or merely existing in our hearts and imaginations.

But before I launch into calls to worship the Goddess under the full moon I must ask: What does it mean to be a woman? What does it mean to be “feminine”? And isn’t Sophia just one of many female heroes, aeons, emanations, and goddesses, we find in the Gnostic scriptures? And possibly…are we doing a great disservice to these scriptural women as well as Mother Mary and the Magdalene if we simply view them as masks for Sophia and nothing more?

These are not hypothetical questions. Please read the Gospel of Mary, think about Sophia, and read The Invisibles and let us know your answers to the questions posed above, as well as your thoughts on Lord Fanny as the great Divine Feminine figure of our time.

Please fill us in on your revelations, write your own gospels and live your own myth via the comments section below…please…we need to hear from you, we seriously DO NOT have all the answers.

Get your own Generic Human Soul T-shirt, an evocative phrase Clark coins on the show, by clicking here.

The opinions expressed in this post do not necessarily reflect those of the Gnostic Wisdom Network, the Apostolic Johannite Church, or any other organization.

Doniel recieved this message from Sophia and I get goosebumps every time I read these words:

“I address myself to you because you are my friend, my servant and the prelate of my Albigensian Church. I am exiled from the Pleroma, and it is I whom Valentinus named Sophia-Achamôth. It is I whom Simon Magus called Helene-Ennoia; for I am the Eternal Androgyne. Jesus is the Word of God; I am the Thought of God. One day I shall remount to my Father, but I require aid in this; it requires the supplication of my Brother Jesus to intercede for me. Only the Infinite is able to redeem the Infinite, and only God is able to redeem God. Listen well: The One has brought forth One, then One. And the Three are but One: the Father, the Word and the Thought. Establish my Gnostic Church. The Demiurge will be powerless against it. Receive the Paraclete.”

Next week on Blog Gnosis: Only God can redeem God.