Home / Blog Gnosis / Gnosticism: A Religion For Our Times [Part 1]

Don’t worry! I’ve still got lots to say about our two most recent shows with Dr. Glen Fairen about the Dead Sea Scrolls and Marcion, but lets take a little diversion to talk about a topic on my mind a lot: Gnosticism is the religion of NOW!

Any adherent of what are sometimes called the Great World Religions–be it Islam, Buddhism, Christianity, what-have-you–has to do a fair amount of fitting a square peg into a round hole when talking about why their religion is relevant for today. That’s because these faiths are thousands of years old and much of their language, symbols, scriptures, and rules, have to do with the specific time and place they come from.

Gnosticism is no different, it has an ancient foundation, but it isn’t the 2nd Century so we need to interpret it for our situations here-and-now while still being true to the tradition. But that’s not what I’m going to try to get at in this post. While I believe Gnosticism is timeless and suited for any era, I think it’s particularly suited to the here and now, here’s why: 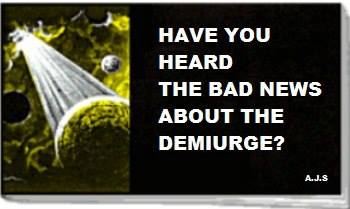 The Simulacrum Is Now Obvious

Streams of Gnosticism teach that this world is a poor copy of a better one. Or that this world is a false one or fake-ish one that’s overlaid and restraining the Divine reality. This insight–taken as either a metaphor, a direct truth, or both–changes a person’s whole perspective. And now we live in a time of fake news, the Internet, virtual reality, and smartphones….we need the Gnostic wisdom about fake realities more than ever!

As women’s, trans, and gender, rights rise, a religion with a plethora of divine female figures makes a lot of sense. And for those trans, genderqueer, agender, and nonbinary, there’s a lot of interesting gender-bending in the Gnostic scriptures, but I need someone smarter than me to unpack it (and maybe someone not as cis, male, and straight? Any volunteers, the comment section is below!).

The Rise of Fundamentalism

There’s a general assumption that history is progressive, including religions history, and therefore religion goes from literal to symbolic. However, this isn’t necessarily true, Christian fundamentalism (as well as it’s horrible siblings in other faiths) is a modern (within the last couple hundred years) reaction to science and societal changes that attempts to turn the Bible and Christian mythos into something literal that can compete with, and supplant, the scientific worldview.

We have Christians from 1800 years ago writing about how they’re flabbergasted that there’s people who take the Adam and Eve story as factual history! Now, obviously millions of religious people for millennia upon millennia have had narrow and literal readings of their faiths, I’m not claiming otherwise, just that fundamentalism is a very specific and dangerous literalism. The perfect antidote to this horrible surge is Gnosticism as it interrogates all religious premises, unleashes the forces of myth and metaphor, and reveals who the fundamentalist’s god REALLY is! (you can guess who I think he is

That’s what I got for now, but this is only Part 1…so please jump into the comments and tell me why you think Gnosticism is particularly apt for this age!

2 thoughts on “Gnosticism: A Religion For Our Times [Part 1]”